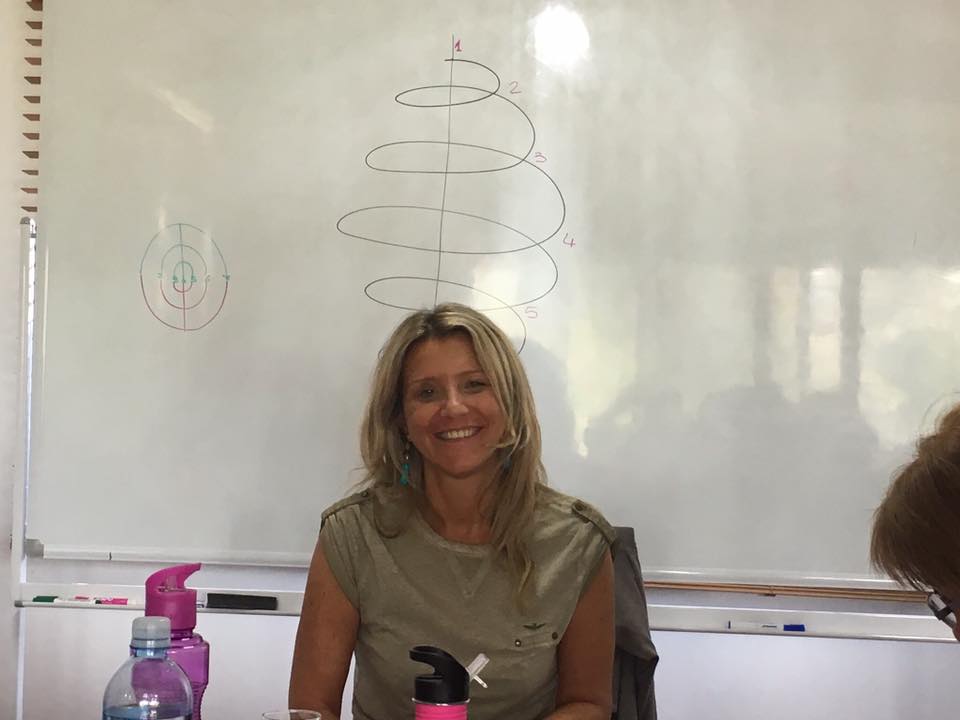 She was born in Italy and was educated at the University of Bologna in Humanities and Arts. At the age of 14 she had a major accident and, while she was in coma, she had a near-death experience. This event changed the course of her life as she started looking for a way to re-connect to “the other part”.

She lived in Australia from 2000 to 2006 and during that time she attended many courses on Spiritual Healing, Crystals, Aura-Soma® and Numerology.

In 2002, she started working at a Holistic Centre as a Colour Consultant and Spiritual Healer.  Later, she was asked to teach meditation courses and seminars for the development of the spiritual aspect and the inner potential.

In 2004, Cristiana begun to travel back to Italy twice a year to teach her classes and courses and because of her intense work overseas, in January 2006 she moved back to her country where now she is a very active teacher.

The Australian experience was very positive and insightful. There, Cristiana met Mike Booth, principal of Aura-Soma Ltd and heir of Vicky Wall, founder of the system, and after her return became very soon his official Italian translator and organizer, bringing many international students and people to attend his workshop in Italy and UK. Now she is one of the most accredited Aura-Soma teachers in the world.

Due to the current circumstances, Cristiana can’t come physically to Australia, but will be offering these courses for the Australian group in 2021 and 2022. See below for descriptions for each course on offer.

The Planets and your Chart Aspects.

In an astrological chart there are 3 levels of consciousness based on the 3 crosses – the mutable cross, related to personality, connected to form, body and mass consciousness; the fixed cross, associated to the disciple, the one who is aiming to align to the soul and that is working on taming the ego; and then the initiate, the one who has become completely transparent (selfless) and that allows the energy of Spirit to flow through.

The first two crosses move clock-wise, as the individual is completely subjected to the energy of the stars. The last one moves anti clock-wise as the initiate has managed to free himself from the dependency from the stars and he is now using the energy that flows through them to co-create with the creator.

The aim of this course trilogy is to teach the student how to read an astrological chart and understand the potential of growth that it hides showing how it is possible to transform a challenge into a gift and rise in consciousness. As consciousness expresses itself through colour, our journey will be supported by the Aura-Soma colour-care® system astrology colour and Equilibrium bottles attributions in order to enhance the understanding of our soul journey through time.6th

INTRODUCTION TO THE LABYRINTH

1-day workshop (Open to all)

Labyrinths have been used since ancient times.  They are built using mathematical laws and Sacred geometry and are a fantastic tool to help humans to open up to their intuition (inner teacher).  In this seminar, we will start a journey of discovery, using the Labyrinth as a meditative and introspective tool, which can offer us the possibility of connecting with our deep inner self, any time we might need to.  We will share its history, structure and meaning; what walking a Labyrinth means, and, in meditation, we will walk the Finger Labyrinth to directly experience the profound meaning of a journey to the centre of our being.

Spirit turns the wheel of life. The Weavers will reveal its beauty

In this module, we explore numerology in association with the Tarots – Minor Arcana.  We will follow the cycles of formation of our alchemist/physicist Universe from the point of view of Spirit.  We create the Weaver’s Wheel to understand the fusion of spirit with the elements that give structure to the will to be, to love and understand.  The workshop will help us to ponder on the qualities of the message given from the Weaver’s wheel and use the nine numbers from our chart to understand our Soul motivation, our Spirit in action (method), and the realisation of our potential. We share our story as we share our love and our wisdom for the care of our one life.

The Diploma course offers a deeper understanding of relationships and karma and focuses on the development of intuition. It goes deeper into translating information from numbers in order to access the wisdom of the Soul.  Visualisations are used in this course, as well as more developed systems of chart readings.  By the end of the Diploma course you will have acquired a depth of understanding of numbers and charts to be able to offer a professional chart-reading service to the public.

Days to be confirmed, starting in September 2021.

This workshop unveils the esoteric meanings of the Major Arcana and the journey of the Soul through initiation.  It is based on the teaching in the book “The Spirit of the Tarot” and using the symbolism found in the Major Arcana of the Oswald Wirth Tarot pack.  The Tarot, seen as an initiatic tool, offers a perception of the inner work that a human being has to achieve as he associates with his Soul.  This leads to contact with the higher mind and its universal experience.

This course offers an exploration of the Tarot, which reveals the esoteric numerological links underlying this ancient system.  It also describes the journey of the Tarot as the process of the expansion of human consciousness towards the enlightened mind of the Universe.  It is not about using the Tarot as a method of prediction, but rather as a guide through which we can look at the state of our awareness of the world as it is today.

If you are interested on these courses, please contact Clara Donini on clara.donini@internationalinitiationschool.com and copy healing.butterfly.touch@gmail.com.  Please specify you are part of the Australian group.

Also, talk to Clara if you need a payment plan, so she can set you up.  Additionally, if you are re-sitting any of these courses, please let her know, so she can provide the re-sit price.